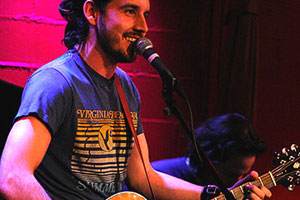 It’s hard to find an artist who penetrates today’s music with an undeniable timeless quality in voice and authenticity like Wes. His songs are saturated with melody, heartfelt lyrics and music that bridges pop & rock sensibilities.  Influenced by soul, timeless folk and unforgettable rock records, Wes issues a sound that is deep-rooted and real. Since moving to New York City a year and a half ago, he was named Grand Prize winner of the BMI-sponsored Rock Boat Song Contest in 2004, which lead to an opening slot for Shawn Mullins.  He also had the opportunity to play a private industry showcase for Billboard Magazine at the prestigious Core Club in Midtown Manhattan.  “Things We Need the Most” was the featured song in MTV’s hit series Laguna Beach.   Other songs of Wes’s have been featured on TV shows and DVD compilations such as Boston Public, Roswell, Party of Five, The Young and the Restless and season two of Laguna Beach.  “It’s the troubadour spirit that gets me through hard times and becomes the storybook that is my life.  I hope to evoke and share that with others in all of my songs.”  Within his repertoire of songs, you can hear influences ranging from the vulnerability of John Lennon to the catchy confidence of Crowded House, while drawing heavily from rock classics like The Who and U2. Wes brings fun and unwavering passion back into music and he is anxious to prove to the world that he has what it takes.  Wes is sponsored by Gibson guitars and is currently working on an EP.