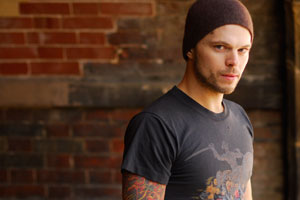 WATT WHITE brings both power and vulnerability to a sound only a pop soul with a metal heart could create. A NYC-based singer/songwriter, his 2008 self-produced EP reveals the tip of an iceberg where soaring anthems and grinding vocals alike remain grounded in honesty, melody and songcraft.

WATT WHITE arrives in 2008 with half an album in the can and 10,000 road miles under the belt… after logging several years fronting a NYC-based punk metal outfit (and touring the US and Canada dozens of times with Megadeth, Deftones and even the full Warped Tour ‘06), WATT put down the screaming mic and picked up the pen, digging into an untapped realm of melody and songwriting depth.  Deciding to bypass a smoldering music biz wasteland, WATT dug 6 songs from his arsenal of acoustic demos and started his new solo recording on his own. Holing up at Long Island’s Vudu Studios with former bandmate Rich Liegey at the engineering controls and bass, the first half of “DARE ANYTHING” was recorded in the Winter of 2007. The self-produced effort was mixed by Mike Watts and features KYLE PAAS (guitar) and ALEX SMOLINSKI (drums). Says WATT: “For the first time I sat down to write songs with no preconceived notion of what it had to sound like or where it had to fit—-what came out is organic…”