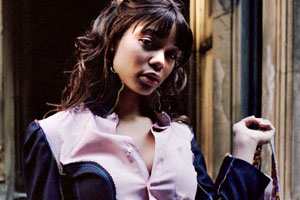 “I’m never going to be what people expect me to be…the typical love-song-making-diva-wanna-be.  Instead, I’m going to be what people want me to be…and that’s my true-self”.
Strong yet vulnerable, disciplined yetl free, Summer is a songstress who blurs the lines of common musical convention.  Only 22 years old, the Bermudian/Panamanian native New Yorker is forging her way into the national arena with unchained vocal chords, versatile songwriting skills and enough raw emotion to turn us all into believers.  Influenced by Chaka Khan and Rachelle Ferrell, along with the powerhouse gospel vocals of Aretha Franklin and Karen Clark, Summer’s love for music became rooted when she began singing in church pews as a child. She has toured and sung background vocals for Gwen Stefani and No Doubt, Busta Rhymes, David Banner and Pink.  “After touring and watching the behind the scenes of the music business, I knew that I could do this,” the young singer proclaims about her decision to enter the music business as a solo artist. “It was that extra push that I needed to take my music seriously and go out on my own.”  Summer has begun to spread her wings by creating her debut album, Giving It All, with sounds provided by her innovative production team, the SupaSonics.  One listen to this CD provides solid testimony that she is treading in new waters.  “I refuse to fail.  This is my passion and I am going to make it happen.”