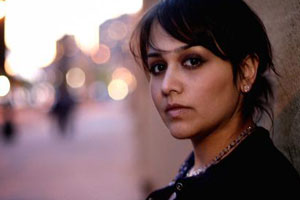 She’s cool, with a frankness and roughness of a fiercely independent woman, quick with a self-deprecating joke, full of anecdotes to warm up her audience – by all appearances, normal like you and me. It’s when she opens her mouth to sing that you fall back into your seat, with the sound of her honeyed, lush vocals wrapping around you…completely captivated. It’s then you realize there’s nothing normal about her— Shelly Bhushan is exceptional. The Texas native has been belting her soulful heart out practically since birth. She’s sung in many projects, everything from choral to swing, funk to classical, but always wanted to do her own thing. She moved to New York City to front a soul-rock act, and when the band broke up that opportunity came.

New to songwriting after years of being “just a singer”, her musical direction changed course as she carved out her own musical path in the NYC music scene. In this world of over-produced recycled pop singles buoying in a vast sea of basement, lo-fi musicians trying to break through the channels and challenges of music 2.0, it’s rare to find an artist who combines great songwriting with vocal power and emotion. Enter Shelly Bhushan: Her songs are personal, intense, real, and memorable, her performances unforgettable. Shelly sings the emotions her audience has felt before; you can see her transform them from mere listeners to kindred spirits. Shelly is real; she gets them, and they her.

Bhushan and her formidable band—John Celentano (drums), Harry Cordew (bass, backing vocals), Ben Hoffstein (organ, piano) – have cultivated a heavy rhythm section, fusing classic soul, funk, motown, blues and pop, backed by lyrical strings and a horn section with an attitude. Hearing them is to hear a band that owns their songs. Shelly just finished her first full length CD, “Picking Daisies,” a collection of songs from this place and time in her life. The album ranges from groove/funk based tunes about anxiety “Picking Daisies” and “Perfect Stranger,” to power ballad/redemption songs “Not to Me” and the heartbreaking ode to the death of a relationship, “It’s Over.” It’s a sweet mix of influences; you can hear the retro-funk of Stevie Wonder, the guilty pleasures of a pop riff, the grit of her Texas roots that make a sound all her own. Shelly Bhushan is a rare, exceptional flower, and we have the divine pleasure of watching her as she blossoms—and becomes so beautifully undone.