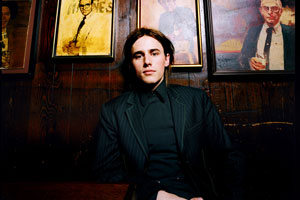 Reeve Carney is the lead singer and songwriter of the band Carney, accompanied by his incredibly talented brother Zane on lead guitar, and a rhythm section that he has been playing with for years. As he explains, “the cool thing about our band is that we all grew up together or met in school.” There’s something in Reeve’s youthful countenance, in the beautiful, moody, carnival-esque, hypnotic nuances of his music and in the sincere way his delicate voice carries the emotions of his songs that remind you of an innocent soul caught in a world of adults who no longer remember how to follow their imagination and dreams.
Yet, Reeve is far from being a child and his humble manners fail to conceal a long history of musicianship. His mother a classically trained vocalist, encouraged his natural affinity toward music from an early age while his father, a mainstay in the jingle business, often used his son’s gift on the job, teaching him the art of writing a good hook along the way. The child prodigy did not waste any time on the road to greatness. Reeve recorded an album with Peter, Paul and Mary when he was only 8 years old and was contacted a few years later by Michael Jackson to sing on one of the tracks of HIStory.

In 1997, when his mother could no longer afford guitar lessons, she brought him to an old Los Angeles blues club where he started playing weekly with artists over twice his age. A few years later Carney put another notch in his belt by winning Best Performance in a Feature Film during the 2000 Young Artists Awards for his portrayal of a young Ethan Hawke in Snow Falling On Cedars.

Now 24, Reeve has close to a decade of live shows behind him and the experience is obvious, from his virtuoso handling of the guitar and piano to his incredible stage presence. His music effortlessly combines an array of styles drawn from rock, folk, jazz, reggae and blues with Southern influences. “I try to make music that’s timeless,” he says, and he does. His songs can evoke anything from Jeff Buckley to Paul Simon, John Lennon, John Lee Hooker, Pink Floyd, Led Zeppelin and George Gershwin. With an ear for the unusual and the sublime, he creates melodies of powerful force and chaotic grace. They are transported by words that speak of love, loss, faith and the human aspiration to greatness. Anyone who has had the chance to see Carney perform is immediately moved by the way his true love for the craft of songwriting always shuns manufactured entertainment: “Music is my passion,” he states with heartfelt sincerity. “I would continue to do it whether or not I make a dime.”

Years of playing in and around LA resulted in Reeve and the band securing a weekly residency at the historic Molly Malone’s which was memorialized with a double live CD/DVD called “Live at Molly Malone’s” and captures the magic of these sets that are already becoming legendary. The independent release serves to share with those who could never make it and as a legacy for those who were a part of it.

The band’s enormous promise and undeniable talent led the illustrious manager David Sonenberg of Fugees and Black Eyed Peas fame to take them under his wing. They have been signed to the DASLabel/Interscope, and their album “Imperial Lover” will be released sometime in the late summer of ‘08.  In the meantime, try to catch the band touring, as that is what Carney will be doing non-stop for the foreseeable future.