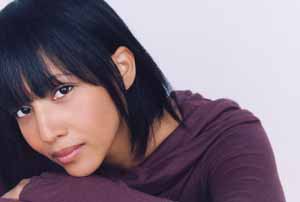 Rebecca Jordan grew up in an all black neighborhood in Ohio. When her parents split at age 10, Rebecca went to live with her father, a choir director and former doo wop singer. It was through her father’s old record collection that she came to know him and ultimately herself. Music was a refuge. Rebecca listened to everything from James Brown to João Gilberto, Paul McCartney to the Pixies, Dinah Washington to Debussy, Crosby Stills and Nash to The Cure, which explains the eclectic nature of her sound.

After a brief stint studying biomedical engineering, Rebecca realized music was her calling. A development deal with J records helped Rebecca’s song ‘Beautiful Disaster’ find its way to Kelly Clarkson who has recorded it twice. Rebecca then financed, produced and released The Trouble With Fiction through her own Tea Party Records. The six song EP includes a signature interpretation of the Stevie Nicks classic, “Dreams.” Rebecca produced a music video for ‘Dreams’ which has been featured on MtvU, Fuse, VH1.com, Spike TV and screened at the Redcat by IFP.

Having just become a New Yorker (Brooklyn specifically), the subway is Rebecca’s writing room, observation deck, and mixing suite. She is collecting songs as souvenirs for her next record, writing with and for other artists, and singing her heart out in the dark bars of NYC.