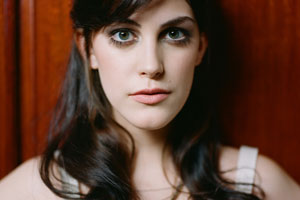 Born in Shreveport, Louisiana, Natalie and her family moved around a lot as a kid, eventually settling in the Nashville suburb of Franklin, Tennessee when she was just 7 years old. Always playing and writing, by the time she was 12, Natalie was determined and knew not only what she wanted to do, but also exactly how she wanted to do it.

After spending the next few years at home, constantly singing, writing at the piano or with a guitar in her hands, Natalie began to establish herself a reputation as an up and coming writer and singer, and was recruited by songwriting veterans to bring a more genuine voice to their songs. When she was 16 years old, she began to receive some interest from various record labels, and as a result was introduced to producer Mike Elizondo (Dr. Dre, Fiona Apple, Maroon 5, Rilo Kiley). Not conforming to other people’s ideas of what she should sound like, she moved to LA to be able to begin working with Mike where she learned a lot about sounds and producing from one of the best.

When brush fires spread around Southern California in the fall of 2007, being advised to stay indoors and prepare for evacuation, Natalie moved in with some friends, including long time Elizondo engineer, Scott McKay Gibson. Being stuck inside with a producer and a studio, she and Scott began playing around with some of her songs and the two began to collaborate on the production of I Will Take You Under. Fusing her influences in rock, pop and indie music, she found the sound she was looking for, as well as the catalyst to dive into the rest of her material. They blocked out the next few months to record, and recruited the help of Zac Rae (Gnarls Barkley, Annie Lennox) in Los Angeles, and Chad Howat of the band Paper Route (Paper Route, Brooke Waggoner) in Nashville to help produce. From the songwriting, to the guitar tones, to the artwork, this is who Natalie Warner really is. She’ll get right inside your mind, you’ll understand in time.