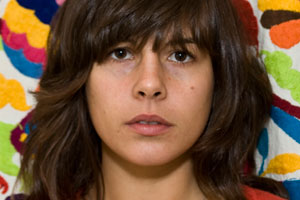 With a staggering voice and a gift for poignant melodies and innovative arrangements, Madi Diaz is folding her roots, pop and indie influences into her own paper airplane.

Diaz was raised and home-schooled in Pennsylvania’s rural Lancaster county, the daughter of a musician (her father Eric Svalgard plays keyboards in the noted Frank Zappa cover band Project/Object) and a schoolteacher, Nancy Diaz.  Encouraged by her parents, Madi began commuting to Philadelphia in 2002 to attend The Paul Green School of Rock Music, where her father would also volunteer (today Eric runs the Wilmington, DE branch of the school, where Madi’s brother Max is also an instructor).

Her somewhat contentious relationship with Green himself would be captured for audiences to see in the 2005 documentary film Rock School. Even at that young age, Madi had forceful ideas about her music, an instinct that has served her well in avoiding lazy categorization.

Green’s School of Rock led to a scholarship at the Berklee College of Music in Boston, where Madi would spend the next three years. Beyond musical education, it was at Berklee that she met producer Frank Charlton and engineer Martin Cooke, with whom she would record her first solo album, Skin and Bone, in early 2007. Joining her for the sessions was another Berklee student, Kyle Ryan, her songwriting and performing collaborator ever since.

Skin and Bone is a sparkling debut, capturing a rootsy side of Diaz as singer-songwriter and drawing comparisons to the work of artists like Patty Griffin. But just as soon as Skin and Bone arrived, Diaz was already moving forward. She and Ryan began co-writing with others, and the pair, often joined by bass player Adam Popick, started to play regularly in and around Boston. A chance meeting at a show in New York City lead Madi to her manager Ty Stiklorius (part of John Legend’s management team) and in turn to a publishing deal with Cherry Lane (Ryan, too, signed with Cherry Lane).

With support from her new management and publisher, doors began to open and interest in Madi grew, especially after people saw her perform at places like the Rocky Mountain Folk Festival, WXPN Philadelphia’s XPoNential Music Festival and the Living Room in New York City’s Lower East Side.

The sound of Ten Gun Salute might surprise those who have heard Skin and Bone, as Madi and Kyle veer off into new sonic territories. Toy pianos plink. Fat basslines oomph. Americana overtones give way to imaginative pop structures. All the while there’s that amazing voice weaving through. From the simple and sublime “Heavy Heart,” to the instantly memorable “Nothing At All,” the evocative storytelling of “Love You Now” to the damn-near-epic title track, Ten Gun Salute finds Diaz soaring.