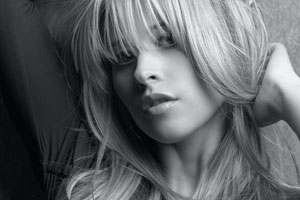 Linda Kiraly is not your “Average New Artist.” In many respects, she’s not actually new — certainly not if “new” implies a lack of experience. And in no sense is she average: At 13, she performed at Carnegie Hall and she can count Sir Andrew Lloyd Weber as a fan. But one thing is for sure: Kiraly’s luminous American debut leaves no doubt that this 24-year-old singer is, in the word’s truest sense, an artist.

Kiraly caught the music bug early: Her Hungarian parents were musicians, and famous ones at that. “They were in rival groups,” says Kiraly “So it was a big drama when they got together.”

Flash back to 1982: Before the fall of the Berlin Wall, before the collapse of Communism. Despite their success, Kiraly’s parents wanted a change. The young couple decided to immigrate to America, moving from the Eastern Bloc to the Bronx, where, soon after, Linda was born. But things weren’t easy for the struggling Hungarian family in the States. “My father tried to continue with his music,” Kiraly recalls. “He put out an acid-jazz album here. But it was hard to support a brand new family, especially since they didn’t speak English. He had to put music aside, which was painful.”

Perhaps it’s partially for that reason that Kiraly’s parents initially discouraged her from pursuing a career in music. “But I started singing behind their backs,” admits Linda. She studied classical composers; she performed in school productions. “My mother always knew that I could sing,” but it was an astute chorus teacher who first realized her potential. “She told me, ‘Pay attention to your voice. There’s something special there.’”

Gradually, her mother and father relented. “I think the first time my parents knew I was serious was when I invited them to see me perform at Carnegie Hall when I was 13,” Linda recalls. “They were like, ‘Ok, we get it now.’”

Deciding to nurture her natural talent, Linda’s parents allowed her to audition for the prestigious BOCSES cultural arts center. She was one of a handful of prospects chosen from nearly 600 applicants. But it wasn’t all smooth sailing from there. “I was singing opera and gospel,” Kiraly says. “I was the really weird kid in school.”

Chalk up Kiraly’s self-professed “musical schizophrenia” to her parents’ eclectic tastes. Her mom schooled her in classic soul: “I was listening to Aretha Franklin, Chaka Khan and Donnie Hathaway in diapers,” Linda says. Dad gifted her with guitars. “He’s a rocker, so I got into Van Halen and Aerosmith.”

It’s these intermingling of influences (and one very big voice) that make Kiraly’s music so compelling. On her debut collection, she hop scotches effortlessly between ballads (“Best Friends”) and beats (the Rodney Jerkins-produced “Can’t Let Go”) and back again. “Anybody who has been in love can relate to this songs,” she says. Take ‘Can’t Let Go”, for instance: Its deceptively upbeat melody belies the fact that the track is about the heartache that comes from being trapped in a toxic relationship “That’s my life,” says Kiraly, with a bit of trademark Hungarian drama. “I am the utmost romantic, crazy ‘can’t let go’ person. When I’m in love, I’m in love and that’s it. No matter how bad it is, I’m gone.” But it is the hopeful “Higher,” which Kiraly considers her personal tour de force. The track, built on a lilting melody and imbued with an inspirational message, showcases her stunning five-octave range. “I got to do so much on that song,” says Kiraly. “It was a huge growth experience for me.”

If after listening to the album’s poignant tracks, you get the sense that Kiraly sings with an emotion that’s borne of real-life hard knocks, you’d be right. When Linda was 14, her mother was diagnosed with ovarian cancer, throwing her close-knit family into a tailspin “The doctors said that she had less than a five percent chance of survival,” Linda says. “So she decided she wanted to go home to Hungary to pass away. We dropped everything and moved back.”

It was pure culture shock for Linda, who wasn’t even 15 at the time, and couldn’t read or write in Hungarian, even though she spoke the language fluently. But perhaps it was also fate. In between caring for her mother, she enrolled in the Julliard of Hungary, the revered Liszt Ference Acadamy of Music. There she was able to further her musical education, studying with native opera legend Erzsebet Komlossy by day, while gigging with a band, playing rock, soul and funk, by night.

In the back of Kiraly’s mind, she knew she may have to choose between a classical and contemporary direction one day, but the choice was made for her when she was asked to sing a theme song for Szerelem az Utolso verig, a Hungarian movie. “It was a beautiful balled which translates to ‘Love ‘Til the Last Drop,” says Linda. The public ate it up, and the song jumpstarted her career.

More commercial success followed. She recorded the theme song for the Hungarian version of “Big Brother.” “But I was not in the house,” she’s quick (and smart) to point out. By that time, bigger plans were in the works. She was 17 and flying all over the world to meet with producers, songwriters, and agents. In 2003, she released her first record 1. It was a smash. Linda toured Europe. She appeared on too many magazine covers to count. She auditioned for Sir Andrew Lloyd Weber and nabbed the part of Christine in the first non-English language production of Phantom of the Opera. “He handpicked me, so that was a huge honor,” Kiraly says.

But those were far from the only fortunate turns of events. Today, Kiraly’s mother is completely healthy. “It’s a miracle case,” she says. “The doctors can’t believe it.”

Her mom’s recovery enabled Kiraly to make a one of the toughest decisions of her life: At 21, she decided to move back to New York on her own (her family remains in Hungary and are active in the music world again). “I’m loving the anonymity,” she admits. “It’s a really cool feeling to just be able to walk down the streets in sweats with no makeup on.” But what kind of person reaches the pinnacle of success in one country only to decide to give it all up and start over from scratch in a new one?

One who isn’t afraid of a challenge, clearly. “I’m excited,” Kiraly says. “It’s one thing to make it in Eastern Europe, but now I get to prove myself all over again. It’s exhilarating — not many people get to do this once in a lifetime, let alone twice.”

And with the strength of her forthcoming CD, she’s almost a surefire bet. As Kiraly notes, “People are the same all over the world — hearts are the same, feelings and emotions are the same. As long as I can touch the right parts of people, my music will always translate.”

“I am a different artist,” she continues. “I’m not just another blonde pop singer. I’ve studied music since I was a baby,” Kiraly says. “This is my life.”