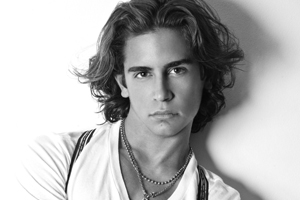 “Creating and performing are a necessity for me.  I think it’s just how I’m wired: the music in my head, the intense imagination… The feeling I get from an audience is such a high, and I guess I knew that at an early age.”

Young audiences may know him as Chris Abeley in the Warner Bros. film The Clique or bad-boy rocker Bobby Love from Nickelodeon’s “The Naked Brothers Band” and the Nickelodeon feature, “Battle of the Bands.” Or they might know his face and shaggy-chic hairstyle from dozens of print ads, even the cover of the New York Times Magazine.  Now, 19-year-old actor and model Keli Price breaks out as a singer, musician and songwriter with the release of his debut EP, Move My Way (The Orchard).

The New York-based artist, touring regionally with his band over the summer, was excited to lay down his first tracks at Electric Lady Studios where Jimi Hendrix, Peter Frampton, Led Zeppelin, David Bowie, John Lennon and countless other artists have recorded.  Set for release November 17, the first single, “Move My Way,” is a pop ballad in the vein of Howie Day’s “Collide” and highlights Price’s winsome vocals and guitar work.  Another song on the album, “She’s Perfect,” is a more tongue-in-cheek, upbeat pop song praising a girl who seemingly has the world on a string.

With his natural good looks, Keli Price entered the modeling industry at the tender age of four, appearing on the cover of the New York Times Magazine for Polo/Ralph Lauren and in print campaigns for Tommy Hilfiger, Sean John, Nike, Reebok, Gap, Cole Haan and several TV commercials.  Price’s first love, however, was music.  He credits his dad, a former New York musician, for introducing him to classic rock, as well as buying him his first drum set.  “I actually started playing drums first, then I picked up the guitar, and then I started writing music,” he recalls, adding, “I’ve always been singing.”

In 2007 Price had the chance to showcase all of his skills together on Nickelodeon’s “The Naked Brothers Band” as Nat Wolff’s archrival, Bobby Love.  “He’s a faux British rocker who’s really a surfer dude from San Diego.  He puts on this British act for his fans!” he laughs.  Last year he was featured as Chris Abeley in the Warner Bros. film comedy The Clique, based on the novel by Lisi Harrison, and just finished filming another feature film, One Fall, due out in 2010.

For more information and photos, please visit his website, www.keliprice.com.