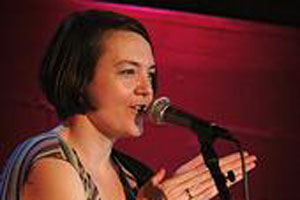 Poet/performer Jodi Shaw is possessed by a distinctive voice, characterized by a certain “delicate toughness” one finds in such performers as Suzanne Vega or Dar Williams. Influenced heavily by language, feeling, and myth, Jodi’s heroes include such artists as Anne Sexton, Frank O’Hara, Elliott Smith, J.S.Bach, and Tori Amos. She is also a big fan of painter Tyson Grumm. Why? “Because he takes me to another world,” she says, which is what she hopes to achieve in her own work.

Her musical resume includes three self-released records with many accolades, including runner-up in the U.K. Singer-songwriter contest. She is a regular performer on the platforms of the New York City subway, where she sings for “the best audience in the world,” the people who ride the MTA. She lives in Brooklyn.