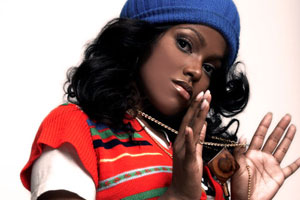 The heading on Jayms Madison’s Myspace page reads as follows: “Before her there were many, after her there may be some, but to leave an impression on the world such as this, there will be few.”

At 19, Jayms Madison is often compared to Beyonce (vocal styling and phrasing), and at the other end of the spectrum, Jay-Z comparisons ensue (collaborators say her ability to “free-style” an entire song on the spot conjures up Jay-Z’s Fade to Black references).

Born in the Bronx of Jamaican decent, Jayms has been honing her singer/ songwriter skills since the burgeoning age of 5. Her formative years were spent in Jamaica, “The Land of Springs”. She recalls, “In Jamaica I didn’t really listen to a lot of [mainstream] music, but I did have some Disney tapes my grandmother sent me from America like Pocahontas, Snow White, Cinderella, and Fantasia. I learned all the songs, musical arrangements, and harmonies on [each of] them.”

Observation of all the elements and nuances in a song is more than likely hereditary for Jayms. Her grandfather, Lloyd Charmers, is a reggae pioneer known for his work with Bob Marley, Jocelyn Brown, and Dennis Brown. “My family has always supported my decision to make music a career”.

When she’s not reading fashion magazines for “daily wardrobe inspiration”, she prefers the self-help genre including her favorite, Don Miguel Ruiz’s Four Agreements. ”That book taught me to be patient with the universe and wait my turn”

A recent high school graduate and fresh out of the Choir Academy of Harlem, it seems as if Jayms’ turn has indeed arrived. With numerous industry insiders buzzing about her promising career, Madison becomes animated when quizzed about the foreshadowing of an exhilarant journey. “My album is still in the making, but it’s bound to be worth the wait. So keep an ear out!” After her there may be some, but to leave an impression on the world such as this, there will be few, huh? Duly noted.