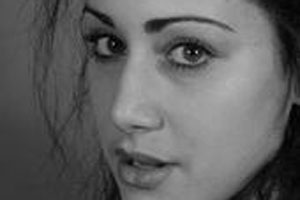 Galia Arad is an overly emotional girl from Bloomington, Indiana.  Raised by two classical musicians, she grew up listening to classical music and attending concerts and summer festivals. Though during her younger years the highlights of these musical events were usually the cookies and lemonade that came along with them, she was lucky to be taking in beautiful music from the ripe age of zero.  In addition to classical music, her father did embarrassing impersonations of Bob Dylan and Louis Armstrong, which gave her a well rounded taste of other genres.

In college she studied voice and theatre at Indiana University where she was a winner of the musical theatre chapter of the National Science of Arts and Letters award. However,  Galia felt her loud mouth had more to say and strayed from her musical theatre path as she was discovering the thrill of songwriting.  She wrote her first song after being diagnosed with mono (from kissing the wrong boys so says her doctor) and was in bed for two weeks. Since then she has completed her debut album “Sand in Your Bed”, produced by RIAX music, and written after tonsil removal surgery- in bed. She moved to New York in 2006 to become a professional singer songwriter and to find more wrong boys to write about. Galia hopes to finish her second album in 2008- in bed, possibly when she gets her wisdom teeth removed.