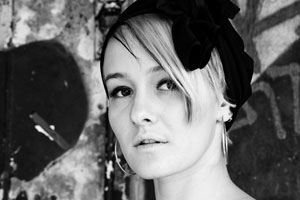 Gabriella was born with music in her heart. Her childhood memories are flooded with the sounds of James Taylor, Joanie Mitchell, Bonnie Raitt and Etta James. She was raised listening to a wide array of music from the strings of classical music to Alison Krauss to Ladysmith Black Mambazo. Her desire to write was so compelling that she would doodle lines in journals before she could even spell. Her extensive travel with her parents brought her to Italy where Elton John’s music producer heard her singing on the street in Naples. He brought her to the first studio she ever recorded in at the age of 9 where she knocked his socks off with her rendition of James Taylor’s “Don’t Let Me Be Lonely Tonight.”

Her modern day inspirations are the artists; Damien Rice, Fiona Apple, Patti Griffin, Duffy, Jem, Jason Mraz, and Tracy Bonham. Gabriella’s music is akin to turning the pages of her diary.  Her vulnerability, her joy, her pain, her honesty, is evident in every line of her songs. Watching Gabriella perform onstage is a rare and intimate experience. Her music is a modern pop-y fusion of the sounds she was raised hearing, with a little bit of soul thrown in.

She currently gigs around New York City at venues such as The Bitter End, Pianos, and Rockwood Music Hall. She has a strong and eclectic fan base that regularly packs these places. She recently worked in LA with Macy Gray and India Arie’s producer, Jared Lee Gosselin and co-writes regularly with Daniel Mackenzie who has also written for Joss Stone.

Two of her songs were featured in the film, “Childless” (the follow up to the Oscar winning film, “In The Bedroom”) which premiered at the Hamptons International Film Festival in 2007. She also performed the title song, “A Little Bit Of Hero” for the award winning animated short film about empowerment for children during 9\11, “The Day My Towers Fell.” Gabriella was recently invited to sing on Broadway at The Minskoff Theatre for an amazing charity called, “Broadway In South Africa.” Besides performing at The Songwriters Hall of Fame New Writers Showcase in Nov. 2009, Gabriella went on to win The Abe Olman Songwriters Scholarship for 2010 from The Songwriter’s Hall of Fame for her song “I Hope It Hurts”. She earned a degree from college in Foreign Languages (She speaks 3 languages besides English) and Literature which has afforded her great opportunities to perform outside the US. She has performed in Mexico City, and plans to perform in Los Angeles this spring.

Gabriella Caspi is truly a star on the rise, but she never forgets her roots, her friends, or the importance of being a citizen of the world and giving back. She continues to follow her passion, writing songs for her own projects, for films and performing regularly. People often ask Gabriella what her dream is, and to this she replies that she is already living her dream each time she has the opportunity to step onto a stage and touch people with her stories.