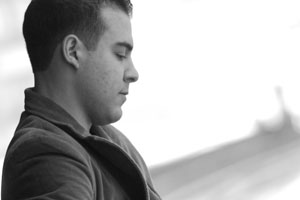 When Dan Ferrari first picked up a guitar at the tender age of 10 in a small, suburban Northern New Jersey town, he didn’t know he’d be told by 14-time Grammy award-winning producer David Foster that his music is “unique” some 14 years down the road.  But it happened.  David’s approval led to Dan’s inclusion in the finals of NBC’s music competition Star Tomorrow in the summer of 2006 and America saw Dan’s face on national television.  Back when young Dan strummed the strings for the first time, he probably didn’t know he would evolve into such a dynamic, compelling songwriter/performer that the Songwriters Hall of Fame would feature him in their New Writers Showcase in New York, acknowledging his tremendous hit-writing potential.  Dan would go on to tour extensively in New York, New Jersey and surrounding states, steadily building a fan base and a huge web community of followers.  When Dan grew up singing along to his favorite artists like Elvis, Boyz II Men, Rob Thomas, Third Eye Blind and the Goo Goo Dolls to name a few, He had no clue he would be finishing his 3rd CD release at age 24.  Don’t Let it Fall is scheduled to be available in May of 2007.  The highly-anticipated album is produced by a long-time musical role model of Dan’s, former frontman for the band Twin-A, John Lardieri.  Dan was featured as artist of the week on major-label recording artist Vanessa Carlton’s website.  Dan’s catchy, up-beat pop/rock tunes have been spun on radio stations including NY’s Q104.3 FM and WPKN Bridgeport, CT.  Dan has gotten well over 53,000 plays and counting on his myspace page.  Dan has been chosen to perform in NY’s acclaimed NY Songwriters Circle showcase at the Bitter End as well.  So, you get the idea.  A dream was born.  It started small.  Now Dan’s dream is unfolding in huge ways.  With his intense performances and exciting, truthful songs, Dan Ferrari certainly shows immense potential to become a major player in the music industry.  Please check Dan out at [url=http://www.myspace.com/danielferrari]http://www.myspace.com/danielferrari[/url]

Here’s what others had to say:

“I have seen Daniel develop into a first rate songwriter/artist over the past two years.  He not only knows how to write great songs but he has an emotional approach to delivering as a performer.  I believe he can go all the way!”

“Daniel Ferrari is one of the finest singer/songwriters to come out of the Songwriters Hall of Fame’s acclaimed workshop & showcase programs. Unforgettable melodies & literate lyrics are consistent elements of his songwriting & his
high-energy performances are always crowd pleasers.”

-Bob Leone, formerly of the Songwriters Hall of Fame

“Daniel will settle for nothing less than greatness and he is well on his way to achieving it. His songs have a hypnotic, captivating appeal and his vocals are raw, yet intimate.”

“I have three things to say about Daniel: great music, great songs and a great voice to top it all off”

“Daniel has an edge, a truth that is refreshing and melodies that you will find yourself singing throughout your day. He connects to the part of you that just can’t help but move when music makes sense to your heart. Daniel sings with a hunger in his voice . . . a sweet sexiness that is so subtle and digs in when you least expect it. A solid, unique artist.”