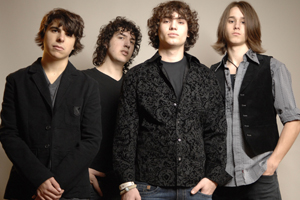 Standing out among today’s crowded rock scene are Reading, PA’s Comic Book Heroes, four 17 year old guys and long-time friends with a sound as solid as any one of today’s more mature rock bands. After playing together for more than five years now (yes, they were 11 when they formed the band), and with hundreds of shows from coast to coast under their belts, Ned Goldman, Steve Kosciusko, Collin MacGregor and Steve Kowalski are setting themselves apart from all the others with a performance and chemistry that significantly surpasses their age.

Comic Book Heroes have already created an underground buzz and reputation for making real time music that goes the distance. Their music is guitar driven, alternative rock with strong hooks and mature vocals; their sound is rooted in classic rock, the common denominator amongst the band members. Mix in their modern day musical tastes with some teen angst and what you get is authentic rock for today’s generation, unlike any teen band that you have heard before and impossible to ignore.

The band was a Radio Disney “Next Big Thing” top ranking artist with their single “Catch Me If You Can” on the Top 15 charts for months and a ‘Top 50 Song of 2009.’ They were also featured on iTunes as the ‘Discovery Download of the Week’ garnering more than 160,000 downloads of their song. Their music has been featured on the 2010 Winter X Games, ESPN, NASCAR and others and their music video on FUSE TV and Disney XD channel. This past summer the band played gigs ranging from Vans Warped to Radio Disney concerts. They also performed at CMJ and sat on a CMJ panel, were chosen to be part of Taco Bell’s ‘Feed the Beat” program and were invited to walk the red carpet and perform at the official after-party for the 2009 American Music Awards. CBH’s music and videos will also be featured on ESPN’s entire 35 week NASCAR season in 2010.