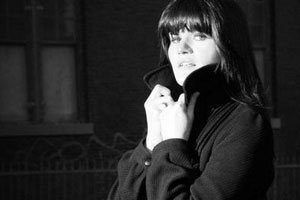 April Smith is tiny. She stands somewhere around 5?2?, but she belts her lyrics like a gal two times her size on new tracks like “Wow and Flutter” and “Colors”. Having worked with producers Adam Schlesinger (Fountains Of Wayne) and Dan Romer (Ingrid Michaelson, Jenny Owen Youngs), April’s retro pop sound, carnivalesque melodies and jangly, suitcase-beating spirit will have you spinning like a whirling dervish! Her sly wit, cheeky attitude, sticky cadences, and profound lyrics are brilliantly reflected in her new material.

Her song “Colors” was recently featured on Perez Hilton’s blog as “the kind of tune you’d hear on an episode of Grey’s Anatomy or in the next iPod commercial.” April’s songs have also been featured in MTV’s hit shows The Hills and Newport Harbor and she has performed on NBC and Fearless Music Television.  Get ready for sing-along love songs brought to life by one of the coolest girls you know, April Smith and the Great Picture Show.