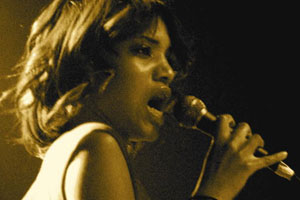 Alice Smith is in Los Angeles, staying high above Sunset Boulevard at that most iconic hotel of ripened Hollywood sensuality, the Chateau Marmont.  Someone asks Smith if she likes it there.  “Oh yeah,” Smith answers with zero hesitation,  “I do.”

She has more to say on the subject of the hotel: “Here’s the thing,” Smith says,  “the one room here that I went to is the best room.  It’s all windows—you can see all over the hills.  It’s overlooking the whole city.  It’s up on the seventh floor, and it’s all windows, and they all open.”  She mentions her dislike of the mysteriously muddy lighting that Los Angeles often cultivates in its interiors.  “It’s not like that in this room,” Smith says.  “I hate dark places.  I really like to see the sky—really, really a lot.”

Recently turned 29, Smith is, on the evidence of her solo debut, ‘For Lovers, Dreamers & Me’ (BBE Records), the most promising female singer-songwriter to go her own enrapturing way in a very long time.  Her voice, with its four-octave range, is luscious and powerful and nuanced and finely sensitive to rhythm.  Yet it never makes a cult of its own abilities; for all its fantastic manners, Smith’s voice gets on down the road.  Sometimes she sings with a booming intensity, yet Smith never loses the unlearnable balance and poise that separates good singers from great ones.  And her basic attitudes, which are audible in every unforced phrase she negotiates, are all her own.

Ask Smith if she thinks of ‘For Lovers, Dreamers & Me’ as any sort of new soul record, and she immediately responds with a couple of plain words:  “I don’t.”

“I don’t think of it as a soul record,” she insists.  “When I was in school, I really thought about soul a lot.  I was listening a lot to Björk and to the Commodores.  I really wanted to know how they felt.  And especially with Björk, the music there told me wow, that’s really her soul, there.  I thought about her a lot, about the sound of her music…  Well, it wasn’t exactly about the sound, and it wasn’t about what other people call ‘finding your bounds’, or whatever.  I thought of her soul; her music made me contemplate her soul.  It made me think of Björk, and how she felt.  You know what I mean?  What she felt like inside.  It was never about the genre.  So I just came never to think of the idea of soul as being about a category.”

When she was growing up in Washington, D.C., Smith enjoyed a lot of time alone to think.  She was the only child of parents who were full-grown adults by the time Smith was born; she loved, as she remembers, the “me-time.”  She always sang and always enjoyed a sharp memory for words and melodies. She never thought all that much about the singing; she just sang.   But, in a rural contrast to the urban aloneness of Washington, Smith also grew up partly in the Georgia countryside, a familiar destination to which she would travel when she wasn’t in school.  Her mother’s family lived in Augusta on a 69-acre farm, and when Smith wasn’t in Washington, she was there..

“I’ve come to realize how much it really was a part of my upbringing, the Georgia part,” Smith says.   “We were away from town.  It was just dirt and trees and spouses.  And a lot of kids—my cousins, who were all like brothers and sisters to me—just a lot of kids at one time.”

At 17, Smith moved from Washington to New York, where she continues to live, to enroll in Fordham University.  She studied history and English—or, as she puts it, “reading and writing.”  University life suited Smith.  “I loved it,” she remembers. “I just thought I wanted to stay in college forever.  I came to New York all by myself; I didn’t have any friends there.  But it was fine.  I felt comfortable.  I started thinking, maybe graduate school?  I was really cool with people who were smart, who knew stuff.  It’s very romantic and stimulating.”

After college, Smith began to work as a back-up singer.  She once briefly participated in what she calls “a little band” that played out and demoed ten or twelve songs. “For Lovers, Dreamers & Me” is her first solo album proper.  It was produced by a drummer whom Smith met while putting together her first sessions for what became her debut album.  Earlier, she had tried out and nixed a few producers.  “I was recording these songs,” Smith says, “and I needed a drummer.  Because nobody else was doing it, he ended up producing the album.  Then we started playing out.”  Things started to click.

Smith wrote four glorious songs of the ten that comprise ‘For Lovers, Dreamers & Me’.  These include “Dream,” a quick-gaited wish for romantic success that constantly smoothes out its melodic and rhythmic angularity with colorful flourishes of reined-in brass and harmony vocals, and the lulling “Love Endeavor,” which mixes bracingly the relative heat of downtown New York and Brazil.  In between are the slow, shadowy, minor-key hopes and worries of “Do I,” and an extraordinary thing entitled “Gary Song,” a piece of music that demonstrates terrifically well Smith’s contention that soul is not a category.

Moving out of rocking verses, Smith jumps into a chorus that’s half theater music and half blues plaint—“If,” she sings, in huge slabs of melody,  “we start the ball to rolling/ Will it stop or keep going?”  The seamless juxtaposition of styles, the passion and the skill of Smith’s unexpected country-flecked urbane vocals, and the subtle string arrangement all combine to create the Alice Smith sublime.  On other songs, she travels—with a rare coherence—from whimsy (“Woodstock”) to conviction (“New Religion”) to dejected intimacy (“Secrets”).

“Half of ‘em are my songs,” Smith says of her collection, “the other half, I found ‘em.  Mine sound like me.  But I think I’m actually surprised, when people say that they can tell mine from the others.  Whatever, I love ‘em.”

She still isn’t sure, though, that with this album she has effected a top-drawer overhaul of the everyday form of the female soul album, which is itself a long tradition of renewing a long tradition.  “That’s big,” she says, looking around her room at the Chateau.  “It would be nice if this stuff got to be some other, some new thing.  I would be so happy.  I think it would be great, if this is where we’re going.  I would love to be the person to do it.  But I almost want to say that I didn’t intend that, but that wouldn’t be right, not exactly.  What I intended to do was to make a record.  You know?”